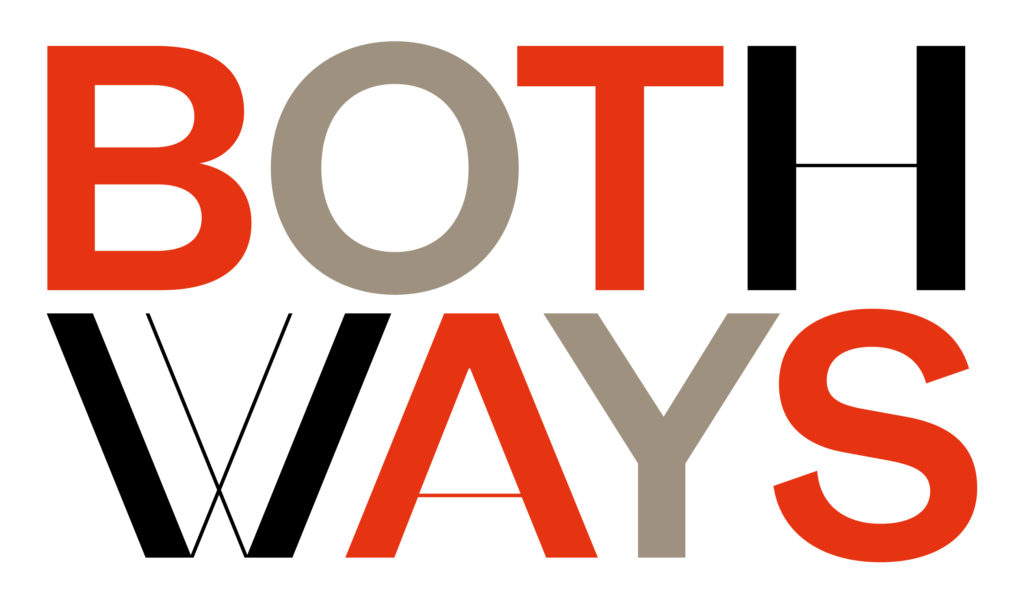 It is a physically polycentric exhibition, held in five European locations with headquarters in Trieste, as well as a replicated and extended online exhibition, virtually available worldwide to anyone who enters it with their avatar.
BOTH WAYS is the outcome of a European co-production project that Trieste Contemporanea initiated in March 2019 in partnership with the Central European Initiative (CEI) and with the Fondazione Internazionale Trieste (FIT), which was proposed to a group of art and science institutions in Croatia, Hungary, Italy, Romania and Serbia, with the aim of bringing into dialogue the positions and specific ways of producing knowledge of art and science.
Therefore, BOTH WAYS final exhibition in Trieste is a co-production of University of Rijeka–Center for Innovative Media (CIM) at the Academy of Applied Arts (APURI) and Department of Mathematics (Croatia); Trieste Contemporanea (Italy); Scientifica, Cluj-Napoca (Romania); Center for the Promotion of Science (CPN), Belgrade (Serbia); Ludwig Museum–Museum of Contemporary Art and Hungarian Museum of Science, Technology and Transport, Budapest (Hungary).

BOTH WAYS opens on 29 August at 7 pm at Magazzino 27 in the Porto Vecchio of Trieste: from 29 August to 6 September this will be the “centre” collecting the experiences of the entire BOTH WAYS project and bringing 27 artists to Trieste, also as “representatives” of the series of BOTH WAYS exhibitions and activities which will take place jointly in temporary “satellite locations” of the Trieste Scientific Festival in Croatia (Outlandish Rijeka, A Walk in Memories, Academy of Applied Arts – University of Rijeka, Rijeka, 28 August – 6 September), in Romania (Departures from the Sphere, Franciscan Church, Cluj, 17 September – 1 October and Camera K’ARTE, Tîrgu-Mureș, 20 August – 12 September; on the virtual site at www.scientifica.ro, 29 August – 1 October) and in Serbia (AI Lab, Kulturni centar Magacin, Belgrade, 1 – 14 September).

A series of in-depth events is scheduled for the duration of the exhibition: two visits to the virtual space guided by the curators and in conversation with the artists (2 September, 5 pm: Croatia and Romania; 4 September, 6 pm: Serbia and Hungary) and the online connections with macroarea partners of the project. Moreover, the finissage (6 September, 5 pm) will provide the opportunity to enjoy in the form of a live performance the work HA arendtrieste by Roberto Paci Dalò, which will “mix” the voices of Hannah Arendt with those of BOTH WAYS artists and of the citizens of Trieste and which will also be broadcast by the ORF Kunstradio Austrian National Radio and by Usmaradio, radio of the University of the Republic of San Marino.

BOTH WAYS is supported by the Autonomous Region of Friuli Venezia Giulia, the Central European Initiative (CEI) and the Fondazione Internazionale Trieste (FIT).
Furthermore, the project is co-financed by KKT: Campus Creative Team, Rijeka 2020, European Capital of Culture, 27 Neighborhoods; UNIRI Projects (Rijeka): Interdisciplinary Research and Application of New Media Technologies in Virtual Reality Art; Department of Mathematics-University of Rijeka and The Elsevier Mathematical Sciences Sponsorship Fund (Croatia) | the Hungarian Ministry of Human Capacities (Hungary) | The Administration of the National Cultural Fund (Romania) | the European ARTificial Intelligence – AI Lab project (EU Creative Europe programme) and the Ministry of Culture and Information of the Republic of Serbia (Serbia).

Both ways, both directions; objective: to relate two fields of knowledge much more similar than it seems and always “directing towards” as vectors. They often meet and share: Science should not set limits to imagination (Bertrand Russell), Every great advance in science has issued from a new audacity of imagination (John Dewey); The task of art is to bring chaos into order (Theodor Adorno), and Art indicates the content of the future (Wassily Kandinsky).
This project has therefore been conceived and constantly addressed in its various parts with a dual perspective. A feature of BOTH WAYS is having pairs of curators for each country, coming from both the world of contemporary art and the world of science. Miruna Amza (RO), Anna Bálványos (H), Miruna Batin (RO), Georgiana Buț (RO), Giuliana Carbi Jesurun (I), Maja Ćirić (SR), Dobrivoje Lale Eric (SR), Julia Fabényi (H), Ingeborg Fülepp (HR), Vedrana Mikulić Crnković (HR) have selected artists and works for Trieste.
Another feature is that in some cases the works themselves were created by a joint team, as for the Croatian educational proposal for students of the Art Academy and Department of Mathematics of the University of Rijeka. Or they have been studied from the outset in a “double” team, as it happened with the Italian project by Paci Dalò, initiated with the scientific collaboration of researchers from the JRC Joint Research Centre of the European Commission.

A significant characteristic of BOTH WAYS project is the interpenetration of real space and virtual space in quasi-continuity. Here, however, reality has surpassed the imagination of curators and artists. Only a few famous catastrophic films were dealing with pandemics when, more than a year ago, in order to unite several European cities and peoples simultaneously under the aegis of art and science, this unusual and still experimental “extension” combining live streaming and virtual reality was conceived together with Antonio Giacomin. And now the acceleration of progress in this type of communication, forced by an unprecedented planetary situation, offers us the wonderful opportunity of visiting BOTH WAYS also from Australia…

Thanks to the different curatorial choices, the exhibition presents the current art-science relationship, from five different point of departure.

The first one is from an artificial intelligence laboratory, AI Lab, curated by Maja Ćirić and by Dobrivoje Lale Eric for the scientific part, commissioned by the Center for the Promotion of Science (CPN) of Belgrade to the artists Vladan Joler & Matteo Pasquinelli, Filip Kostić, Kristina Tica and Victoria Vesna. In partnership with EU AI Lab, CPN presents – Maja Ćirić told us – a creative approach to artificial intelligence that is “a critical practice, and audience is the witness of abandoning the object-oriented culture towards the systems-oriented culture where change doesn’t stem from the object, but from the way in which objects are being constituted (Jack Burnham, Systems Esthetics, 1968).”
For example, the Joler-Pasquinelli duo derives from their own research essay (accessible at http://nooscope.ai/) the work The Nooscope Manifested: Artificial Intelligence as Instrument of Knowledge Extractivism, 2020, an infographics on the limits of artificial intelligence (i.e. machine learning) is intended as a provocation towards both computer science and human sciences (Nooscope, from the Greek “skopein” to examine, look and “noos” knowledge). Or Victoria Vesna, with her noiseaquarium, 2020, immerses us in a 3D audio-visual experience showing the marvellous plankton microorganisms in a gigantic dimension and wondering if they could be affected not only by the murderous presence of microplastics, but also by our acoustic pollution of the sea.

Scientifica, under the scientific direction of Miruna Amza and the artistic direction of Miruna Batin, presents Departures from the Sphere, a selection of 8 Romanian artists of different generations and expressive languages. The curator of the exhibition, Georgiana Buț, tells us that the “departures from the sphere” of Floriama Cândea, George Crângașu, Horia Damian, Sorin Neamțu, Mihai Plătică, Laurențiu Ruță, Catrinel Săbăciag and Ioana Vreme Moser “create an elated perception of our bond with the cosmic realm, through a philosophical and poetic understanding of space. Such a boundless domain is explored through the study of form, its transformation, movement, and conceptual meanings, and the sphere, an iconic form of the Universe, appears in various iterations of its perfect shape. By projecting mental structures and subjective geometries onto the celestial sphere, the works in display awaken visions and utopias”. This is the case, for example, of photographs by Laurențiu Ruță, such as Projection of a Transparent Material, 1977, or of the sound sculpture Zurkubuk. Nux Stridens, 2017, in which Ioana Vreme Moser, forty years later, sees a nocturnal creature that lives in the shell of a walnut and whose random piezoelectric vibrations seem like rhytmic songs.

The Croatian BOTH WAYS section is entirely dedicated to the collaboration of mathematics with art. Curated by Ingeborg Fülepp and Vedrana Mikulić Crnković, respectively professors at the Academy of Fine Arts and at the Department of Mathematics of the University of Rijeka (who are also among the authors of the Rijeka project), and set up by a team of professors and students of both training institutes, the exhibition proposal for Trieste is composed of two interpenetrating projects: A Walk in Memories and Math behind the Walk. The outcome of the collaboration between artists and mathematicians is a virtual walk across the city of Rijeka. In the first project, by scanning a QR code, visitors can extract from the photographs on display the respective 360° videos of different places in the city; in the second, virtual visitors may affect the algorithm that guides them across the city, thus modifying the walk that will be offered to the next visitor.

BOTH WAYS Hungarian section, under the direction of Julia Fabényi, in Trieste presents a video art selection (works by Imre Lepsényi, László L. Révész, KristoFlab – Kristóf Szabó, Kálmán Tarr and Ottó Szabó, Zoltán Vadászi, Gyula Várnai, Tamás Waliczky) curated by Anna Bálványos to offer a brief overview of the history, the relationship and interaction between science and contemporary art in Hungary. At the beginning of this story, science fiction was the main topic dealt with and here two contemporary artists take this into account: László L. Révész in Transfer invents an unlikely use of the movement of the Earth to transport wine from Szekszárd to Lyon, two cities on the same latitude; Gyula Várnai in LEM resumes an interview with the famous Polish writer of the Seventies, Stanisław Lem (author of the novel Solaris, from which Andrei Tarkovsky drew his homonymous film in 1972), who combined science fiction with a deep existential and philosophical reflection and actively devoted himself to biological and cyber sciences. The “improper” use of scientific measuring instruments such as medical-diagnostic devices led Zoltán Vadászi to make air visible. The collaboration between scientists and artists led Kálmán Tarr and Róbert Szabó to develop a device controlled by head movements to move puppets and help the development of disabled children.

Finally, the Italian part, curated by Trieste Contemporanea in partnership with Giardini Pensili, JRC Joint Research Centre – European Commission, FabLab Romagna, Usmaradio and RAI Radio Techetè as media partner, presents HA arendtrieste by Roberto Paci Dalò: a work on multiple formats (Interactive sound-video installation / VR environment / Radio) starting from Hannah Arendt and Trieste. Voices are the focus of the project: an immersive and interactive environment creates a real “forest of sounds” intertwining Arendt’s voice with the voices of the city. Visitors themselves become protagonists by activating both sounds and images. Everything is broadcast daily on Usmaradio and Radio Lada and an interactive sound performance – live on Usmaradio – is scheduled to connect some of the exhibiting artists performing with the author from their own cities. The project was launched in 2018 at the JRC Joint Research Centre – European Commission together with the philosopher and engineer Nicole Dewandre and various JRC laboratories and scientists. 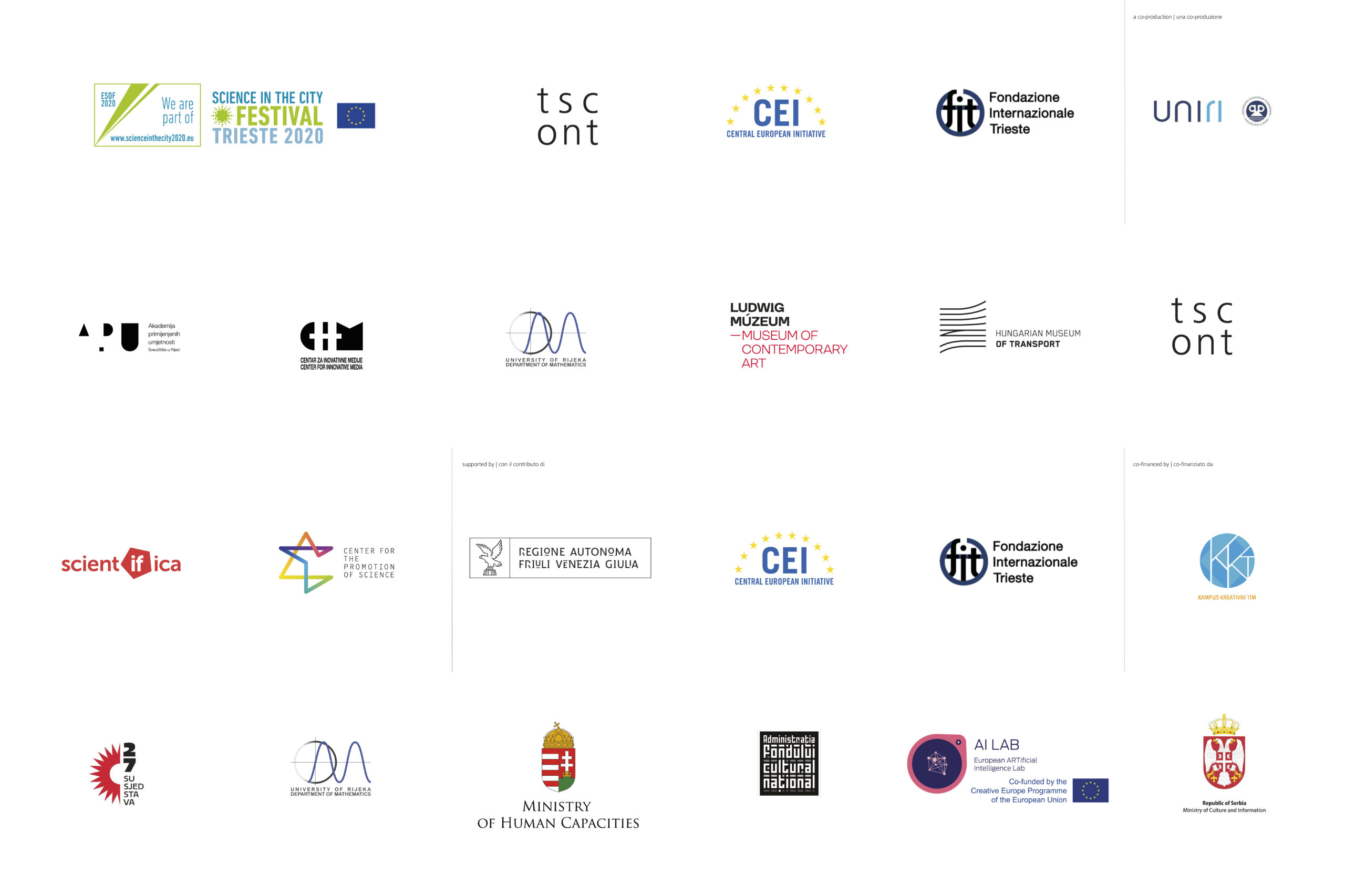