The extraordinary return of the artist born in Trieste proposes a new installation that, taking inspiration from Greek mythology, reaches very topical conclusions, dealing with themes such as the search of beauty and its consequent loss. These themes are seen as symbolic paths into contemporary reality. 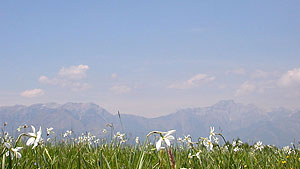 “The artist will present an installation made up of three parts: a plasma screen showing the abnormal flowering on Pian di Coltura where at a given time of the year (marking the timeless regularity of annual repetition) the white of the wild narcissus, waving gently in the wind, dominates even the endless vista of the green fields bordering the mountains; a series of stone letters in relief on a wall, composing the word “echo”; in the same position on a wall opposite an exact specular calque of the word, set into the wall like an imprint, to counter, if possible, the agonising impossibility of contact with the word that flees from itself in the repetition.
A thematic topos of symbolists hankering after the golden age, the myth of Echo and Narcissus is shown by Marassi to have a highly contemporary reading: the impossibility of certainty and a permanent truth. Alexandrine wisdom, with the simplicity that is the mother of complexity, told the story of the two characters in a single version, taken up by Ovid.
To summarise the many versions of the classical myth, Narcissus was a youth of striking beauty but indifferent to the love felt for him by maidens and nymphs, so divine punishment was visited upon him: so struck was he by the first sight of his reflection in the water of a fountain that he allowed himself to pine away to be with his beloved image. Echo, it appears, was such a charming talker that Jove, every time he took a fancy to a comely mortal, used her to distract the attention of Juno, who was very fond of her. There came a time when Juno had had enough, however, and as a result of her punishment Echo was able only to repeat the final syllables of any questions asked her. So when she fell hopelessly in love with Narcissus, instead of declaring her feelings all she could do was bore him by repeating his words back to him. She too pined away until all that was left was her bones, later compassionately petrified by the gods, and her voice.
Aside from the crude determinism of ancient mythology and the highly modern separation of the stories of the two players in the same love story, what emerges with extraordinary relevance to today’s descriptive patterns is the inevitable impossibility of communication (which also means the fatal elusiveness of truth). Its modernity is remarkable if we think of the symbolic representation of two senses as scientifically efficient as sight and hearing for the purpose of certifying the events they have witnessed. And we might add that the vision of Narcissus is highly relevant to the problems of representation in art and the alleged truth of such representation”. (G.C.)