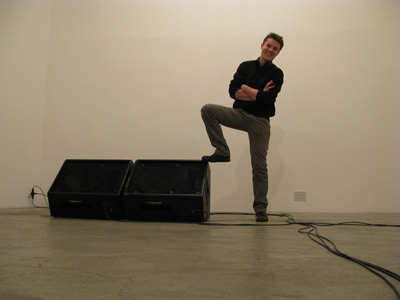 Alberto Tadiello, 2008 Young European Artist Trieste Contemporanea Award, whose award-exhibition ’20kHz’ is extended in Trieste at Studio Tommaseo until March 11th, last Saturday was also awarded the Premio Furla 2009, one of the most important recognition for Italian young artists. This Tadiello’s achievement confirms the attention that the Trieste Contemporanea Award – established in 1999 – gives to the most promising artists of the international scene. Mr. Tadiello with the Trieste Award joins Mr. Ivan Moudov (2006 Young European Artist Trieste Contemporanea Award), that represented Bulgaria at the 52th Biennale of Venice, as well as – just to mention some previous winners of the Trieste Award – the Polish artist Pawel Athamer (2002 Trieste Award), one of the most interesting minds in the contemporary debate on art, or the Macedonian Mr. Nikola Uzunovski (2007 Trieste Award), that is expected to represent his country at the next 53rd Venice Biennial.