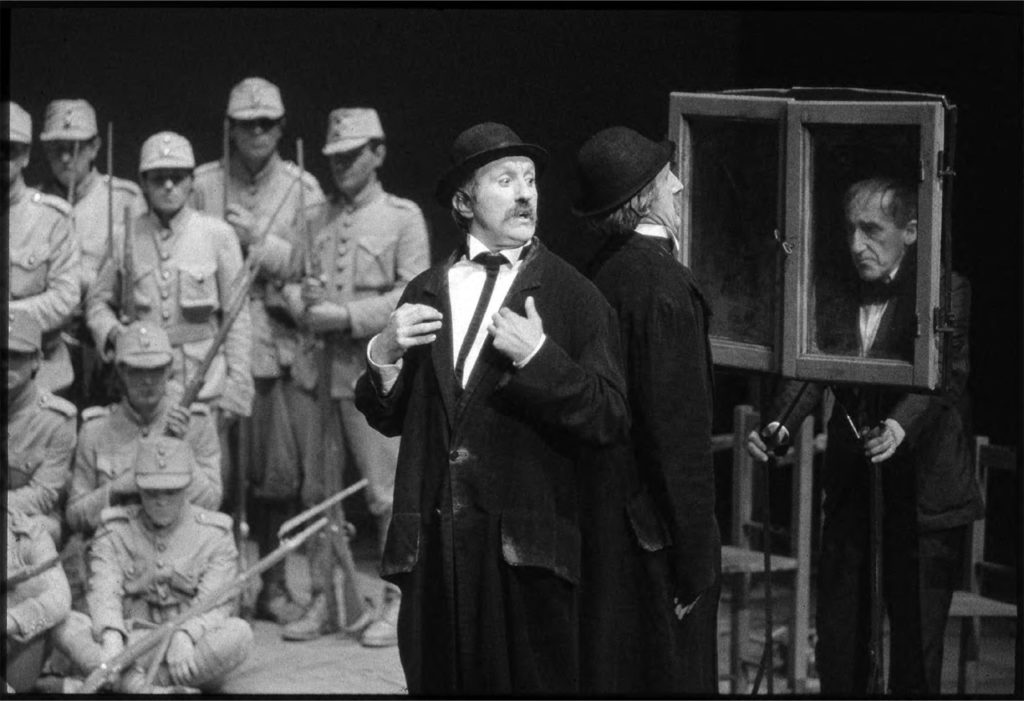 ARTSPACE is pleased to present a TRIBUTE to TADEUSZ KANTOR produced in collaboration with Trieste Contemporanea and Interno3, which will be available online from 8 December at 6 pm on: www.artspace.it

a TRIBUTE to TADEUSZ KANTOR consists of two video/performances: Italian actor, Luigi Arpini, and Polish actor, Andrzej Wełmiński, have created unique two works in commemoration of the great director Tadeusz Kantor marking the 30th anniversary of his death on 8 December, 1990. Both actors were members of Kantor’s Cricot 2 Theatre company.

THE ABANDONED THEATRE by Luigi Arpini is a clear and very much heartfelt testament, coming from his experience as an actor with Kantor’s theatre productions for 12 years.

With IS IT A NEW IDEA? Andrzej Wełmiński reconstructs an action on stage with reference to the final drawing executed by Tadeusz Kantor, and inserting his own ironic and metaphysical dimension into this imaginary landscape.

biography:
Luigi Arpini graduated from the Alessandro Fersen Theatre Academy in Rome, and from 1980 to 1992 was part of the Cricot 2 Theatre company directed by Tadeusz Kantor. Arpini collaborated with Yoshi Oida on the staging of classic Japanese theatre, and he founded the Alkahest company with several members of the Cricot 2 company. From 1994 to 1997, Arpini was the in- house playwright at the Centro di Sperimentazione e Ricerca Teatrale (Centre for Theatric Experimentation and Research) in Pontedera. He has collaborated with the Studio Nabu Literary Agency in Florence, and with ArtSpace. As of 1997, Arpini has added writing to his theatre work. His book, L’illusione vissuta, viaggi e teatro con Tadeusz Kantor (The Lived Illusion, Travel and Theatre with Tadeusz Kantor) was published by Titivillus Edizioni in 2002.

Andrzej Wełmiński Andrzej Wełmiński is an actor and director. He worked with Tadeusz Kantor from 1973 to 1990, and he participated in all the productions and tournées of the Cricot 2 Theatre. Wełmiński graduated in 1977 from the Graphic Arts faculty at the Krakow Academy of Fine Arts. As an artist, he works with diverse media (drawings, painting, photography, objects and installation), and is associated with the Foksal Gallery, Warsaw, and the Krzysztofory Gallery, Krakow. After the death of Kantor, Wełminski realised several productions, together with his wife, Teresa, and some of the actors from the Cricot 2 Theatre company: “Manjacs or Their Master’s voice” (1993); “America, or Don’t Look Back” (1995), “it’s gone, past gone, and so all the stories will go by…” (2007). In 2012, their “Pages from the Book of…” won the Best Actor and Best Production awards in Bratislava’s Festival Istrapolitana.