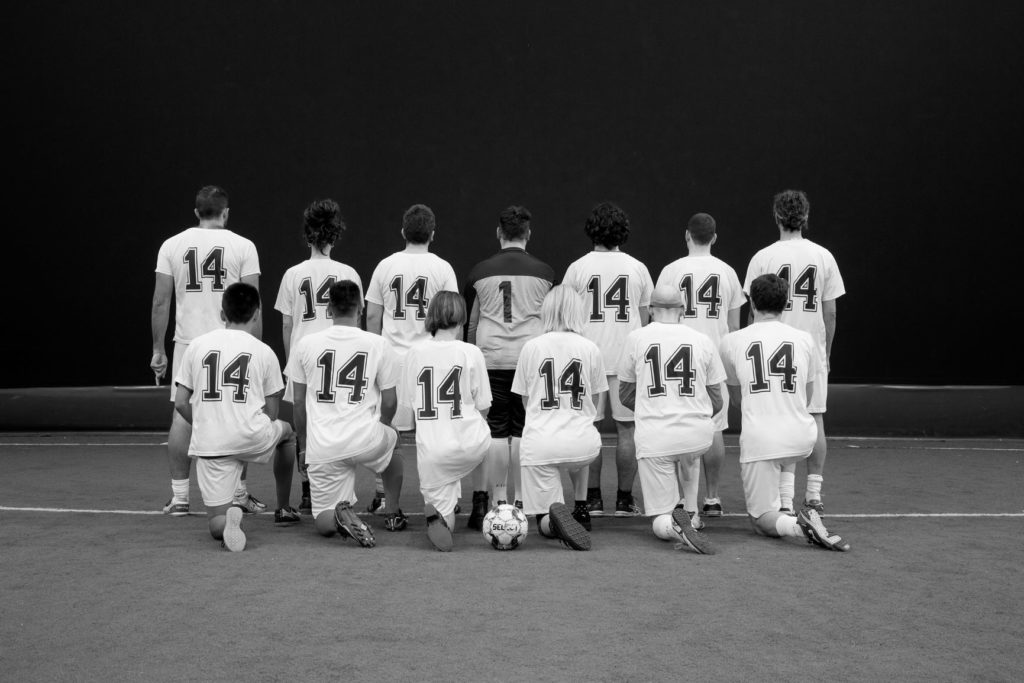 Giulia Iacolutti, I don’t care (about football), 2021
(courtesy the artist)

Football is essentially a ritual; even if it is evasion, it is a system of signs capable of making people communicate with a single language, albeit a non-verbal one. (Pier Paolo Pasolini)

Trieste Contemporanea is pleased to present the exhibition I don’t care (about football) by Giulia Iacolutti that opens on Friday 25 June at 18:00 at Studio Tommaseo.

At the opening, at 18:00, the artist and Igor Peres from Marangoni 105 will present the concept of the exhibition which is a participatory art project: it involves the players of Marangoni 105, a football team founded in 2011 in a psychiatric facility in Udine and managed by Cooperativa Duemilauno Agenzia Sociale.
A second meeting with the artist and Codici Ricerca e Intervento is scheduled for the finissage on 13 July.

The title “I don’t care (about football)”, inspired by the words of a girl from the facility, suggests that the game is not an end in itself, but a practice of social inclusion and integration. In fact, the team is made up of people with psychiatric disorders together with workers and supporters. All players wear the number 14 of Johan Cruijff, the legendary Ajax player, one of the most emblematic representatives of total football. The uniforms, all identical, symbolize not only a way of being on the field and a style of play, but a broader way of thinking, critical of rigid identities and trusting in the possibility of taking and changing roles on the field and in society.
I don’t care (about football) has become a visual research project on the experience of Marangoni 105, consisting of three years of photographic documentation, meetings, training sessions, stretching sessions led by the author, interviews, writing exercises and collages. It is a work in progress that generates endless reflections to be translated into images and that sees the subjects actively involved in the creative process and, above all, in the definition and production of the work. The act of observing and cutting out photographs following the boundaries of one’s own body is part of the process of self-determination. The art object is thus transformed into a place of dialogue in which the discovery of the other and of the self plays a central role: the cut-out shows the empty and the full in their connection. Hence, the “not” in the title represents the coexistence between the need to belong and the discomfort of belonging. Through the cut-out shapes of the bodies it is easier to investigate that “not”, that difficulty which is a common feature of existence and which we should rework, review, decipher.
As Franco Basaglia said: in order to actually deal with the “illness”, we should be able to meet it outside institutions, meaning not only outside the psychiatric institution, but outside any other institution that labels, codifies and fixes in rigid roles those who belong to it.
I don’t care (about football) was developed in collaboration with Igor Peres, coordinator of the psychiatric facility Marangoni 105 and the cooperative Duemilauno Agenzia Sociale.
It is one of the winning projects of Controtempo – a call for research to be told by the social cooperative Codici Ricerca e Intervento. The Milan-based cooperative also supports the actual exhibition.
Part of the project is exhibited at the same time at Mufoco, Museum of Contemporary Photography in Cinisello Balsamo, as part of the group exhibition Chi non salta. Calcio. Cultura. Identità, (Who doesn’t jump up. Football. Culture. Identity) curated by Matteo Balduzzi.
The project posters were designed by Cecilia Cappelli for graphics and Juan Pablo Jerez for serigraphy.

Giulia Iacolutti (1985) is a photographer and visual artist who mainly works on relational art projects on identity, using different languages and media (video, audio, embroidery, performance) in addition to photography. Her work has been exhibited in Argentina, Bolivia, Colombia, Germany, Italy, Mexico, Spain, the United States and Switzerland. Nominated in 2018 for the Foam Paul Huf Award, in 2019 she was awarded FVG Fotografia award by CRAF in Spilimbergo. Her first book, “Casa Azul”, published by the(M) éditions in France and by studiofaganel editore in Italy, was awarded the Marco Bastianelli Prize for Best Artist’s Book. She is among the winners of the Refocus call, promoted by Direzione Generale Creatività Contemporanea (Directorate General for Contemporary Creativity, DGCC) of the Italian Ministry of Culture, in collaboration with Triennale Milano and Mufoco Museum of Contemporary Photography. In November 2021 she will open a solo exhibition at PAC Padiglione d’Arte Contemporanea in Milan, curated by Giulia Zorzi and Diego Sileo.