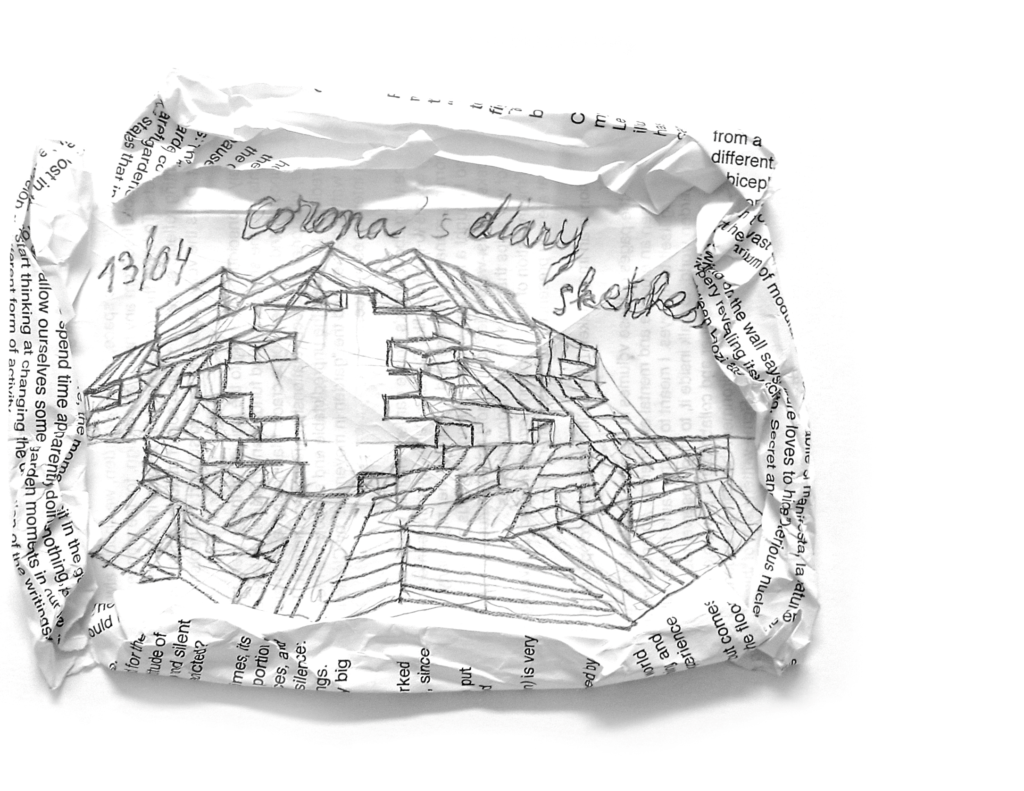 The exhibition is organized by Trieste Contemporanea in collaboration with Studio Tommaseo and curated by Giuliana Carbi Jesurun. It will remain open until 30 April.  (visiting hours from Tuesday to Friday, 17.00–20.00; access with reinforced green pass and FFP2 face mask)

The Italo-Belgian artist proposes in Trieste a focus on three recent series of works – Dazzle Boats, Corona Diary Sketches and Il lettore attraversato – presented as responding to personal artistic coordinates, yet, implying the need for all of us for a more complex triangulation, a method questioning to be able to fix our own Punto Nave (ship’s position): this is the direct address to the visitors of the exhibition, which therefore takes the form of an additional invitation to the invitation to view objects of analysis belonging to the world of culture and art. That is to say: the invitation to activate a process of observation of the facts of consciousness.
While the title of the exhibition refers to the need to find orientation in navigation at sea, the artist’s invitation refers to the need to corroborate the human ability to orient lucidity and ethical awareness. A need that is all more urgent in these recent times, affected by unprecedented planetary situations or horrible events that we have not learned not to repeat.

The Dazzle Boats series features ships painted in camouflage. This was a type of “dazzle” camouflage used in the Great War, which would not conceal the ship but rather confuse the exact aiming of the target from the periscope of a submarine (attributed to British artist Norman Wilkinson, the practice of painting ships with geometric and broken lines is also said to have aroused Picasso’s curiosity).

The Corona Diary Sketches compose an ephemeral daily diary – one drawing for each day of 2020 lockdown – on A4 sheets, recycling the only used paper that was available at home. This practice of daily study was used by the artist to overcome the loss of orientation that each of us experienced during the months of enforced isolation. The pencil marks on folded and torn papers highlight fragility and inconsistency, almost like a thermometer, and the result is an exemplary poetic tale.

Il lettore attraversato (The crossed reader) – a series of large papers, visual syntheses made of dense signs, numbers and colours in the style of nautical maps – is an intense infographic mapping work that assesses and detects the distribution of the 615 textual partitions present in the five parts of Baruch Spinoza’s Ethics demonstrated with geometric method (1677).
Gatti tells us that when browsing Spinoza’s Ethics, before even reading it, one is struck by the distribution of the text on the page: as with Mallarmé’s poems, the first impact is the visual one.

Interests in geometry and morphological systematics have always characterized the series of “rilevamenti” (surveys) with broken outlines typical of Lorenzo Gatti’s research, aimed at establishing cohesion and formal compactness (pictorial, but also volumetric in his three-dimensional works and installations) of imaginary similar-fortresses/spaceships/archaic-future architectures or at re-establishing the overall composition or coherence indexes of fragments and components of trophies/pinballs/map-puzzles. The artist has in fact arranged an effective linguistic-conceptual device to represent a more general and profound meaning of “building”. His expressive procedure investigates the possible solidity of the “building” as a whole, as a structuring complex, as the cohesion of apparently unrelated elements that are mutually participating and indispensable.

Therefore, it is not surprising that Lorenzo Gatti has recently addressed the thought of the great Dutch philosopher on the practical behaviour of the society of mankind (coherently starting from what the artist has defined as the “typographic landscape” of the text of the Ethics). The finissage of the exhibition will include a particularly stimulating conversation between the philosopher Maurizio Ferraris and the artist on the basis of Spinoza’s speculative device (30 April).

Lorenzo Gatti, born in the Democratic Republic of Congo in 1955, lives and works between Milan and Brussels and has had solo exhibitions in Italy, Belgium and New York and many group exhibitions in various European cities. He returned to Trieste after his solo exhibitions at Studio Tommaseo Insomnometrie (1992), Edilizia intima and Edilizia abusiva (both 1998). Punto nave follows his important retrospective Panoplie curated in Genoa by Viana Conti for Sharevolution contemporary art (2020).