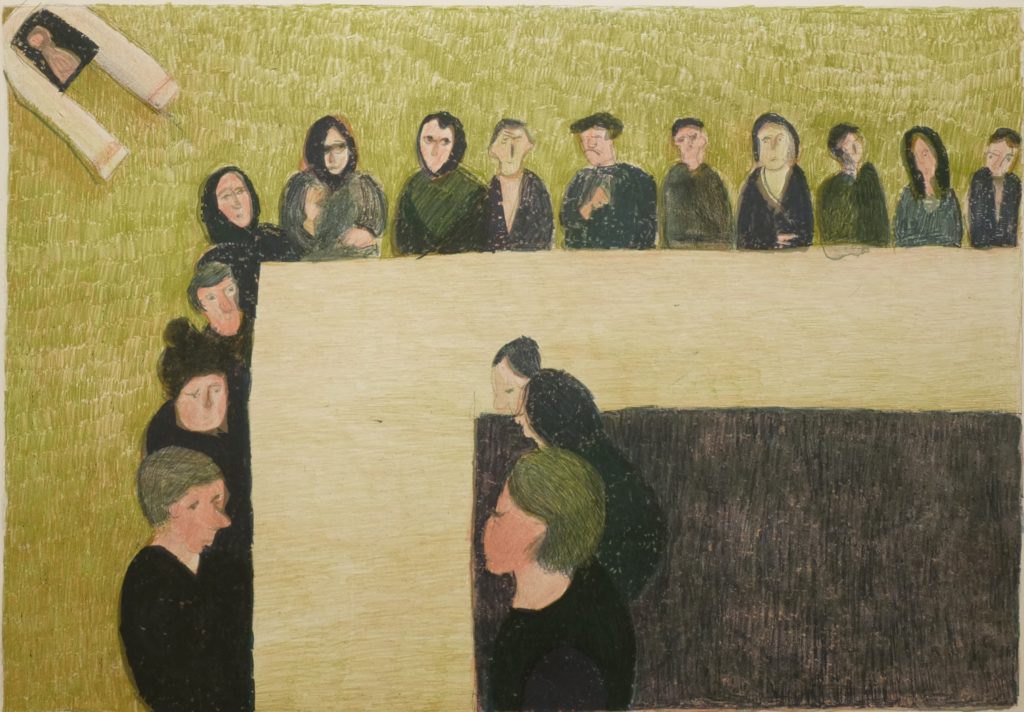 Małgorzata Dmitruk, whom the Trieste public has already been able to appreciate through her contribution in 2019 within the international exhibition La ricerca dell’identità (al tempo del selfie), proposes an series of intense graphic works carried out between 1999 and 2007 as well as selection of knitted clothing created between 2007 and 2012. The exhibition will be open until 12 October 2021, and can be considered a preview of the larger exhibition that will be proposed next year at the Polish Institute, Rome.

The works on display recall the bygone atmosphere of the villages and forests of Podlasia. Together they recount, the artist’s childhood memories of traditional family life, wedding ceremonies or funeral rites in this historical region divided between the eastern part of Poland and the western part of Belarus. In particular, it is the large-scale lithographs that amaze with their graphic expertise in which, as Artur Tanikowski writes in 2009, «the lithographic pastel guided by a nervous path leaves a trace of various structure and breadth. A thick outline circumscribes flat, synthetically treated spots, whose texture is differentiated by multidirectional lines, thickened and then thinned again. Chromatics are often based on strong contrasts of primary colors, such as blue and yellow, which are at times symbolic. The composition models refer to the form of ancient art, pre-Renaissance art, icon painting or non-professional art, in which group scenes are shown in a superimposed composition that loses the geometric perspective».

But it is the clothing, knitted pieces both for adults and infants (a series that precedes the graphic works) that unequivocally combine the past with the present: “I mix the wool that I recover from the garments of different people” – says Małgorzata Dmitruk – “from relatives and strangers. I mix dresses, skirts, sweaters, shirts, blouses. I combine thoughts, time and memories of those days and those people. I combine the past lives of my mother’s clothes, aunts, grandmothers and people I don’t know in one sweater. I give it a new life. I combine the past with the here and now”. Particularly interesting in this sense is the installation Portrait of a family, composed of the clothing of the infant children Avraam, Paraskiewa, Rebeka, Karol, Luba, Chaja, Kazimierz.

MAŁGORZATA DMITRUK (Bielsk Podlaski, Bialystok district, 1974), artist, graphic designer, illustrator, fashion designer and set designer. After studying at the Belarusian National Academy in Minsk, she graduated in 1999 from the Warsaw Academy. She obtained her PhD in 2007, and a post-doctorate in art in 2013. She was assistant professor and also senior lecturer at the Faculty of Graphic Arts (from 2002 to 2014), and director (since 2014) the Relief and intaglio printing studio of the Faculty of Sculpture at the Academy of Fine Arts in Warsaw. In 2000 and 2001 she won the Warsaw Graphic Competition Grand Prix. In 2006, she won the Grand Prix of the Daniel Chodowiecki National Competition in Gdansk: in 2008 she was awarded the Young Poland Program Scholarship of the Polish Minister of Culture and Heritage. She has exhibited in Poland and abroad in more than 50 solo exhibitions and in about 100 group exhibitions.