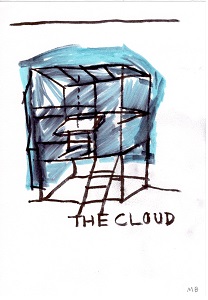 Mirosław Bałka, The Cloud, 2018, ink on paper
courtesy of the artist and Galleria Raffaella Cortese

The exhibition will open at Studio Tommaseo in Trieste, on Thursday 2 May at 6.30pm., in the presence of the artist.

THE HARBOUR FOR CULTURES PROJECT.
Conceived by Trieste Contemporanea as a contribution to the discussion on possible visions for the conversion and reuse of the Old Port of Trieste and as an interdisciplinary research of desires about new future cities, “Harbour for Cultures” has already involved last year curators, designers, philosophers and citizens. The important involvement of Mirosław Bałka to this progressive and participatory project now opens a series of solo-show contributions by European visual artists, which will continue throughout 2020.

BAŁKA AND THE SQUEEZE IT CONTEST.
Bałka will also be working in Trieste as a guest director for the Franco Jesurun 2018 Award. The young Spaniard Antonio Mayor Rey will work with him to produce a video work based on the theatrical action “Action – Evolution” with which Mayor Rey won, December 2018, the last edition of the SQUEEZE IT competition. In this role Mirosław Bałka joins Adrian Paci and Dalibor Martinis, guest directors of the two previous editions of the competition promoted by Trieste Contemporanea at the intersection of theatre, visual arts and information technology.

These new Bałka’s collaborations with Trieste Contemporanea are co-funded by the Regione autonoma Friuli Venezia Giulia, and are in continuity: its first exhibition in Trieste, “Chocolate Grinder n.3” (together with Etty Abergel and Alfredo Pirri), and his participation in the “Out of the West” round table date back to 2005 .

THE EXHIBITION.
With “Wasserzeichen” exhibition Mirosław Bałka offers the Harbour for Cultures project a powerful selection of drawings that will be on display in Trieste until 3 July.
They are drawings not by chance: they respond coherently – not by direct representation, but by suggestion of memory – to the ideal request of HC project forwarded to Bałka by exhibition curator Giuliana Carbi Jesurun.
They are 42 small sheets made for Trieste between 2017 and today, to which are added some 2016 thematically relevant sketches.
If you scroll through the titles of works – i.e., Spine reconstruction, 2019; Keeping time by clapping, 2018; Shit above GOOD, 2018; After collision with the Absolut, 2018; Limits are, 2018; Convergent perspective, 2017; NOTHING, 2018; VOICES, 2018; Catching sun ray, 2019; The Truth, 2017 – it is clear that these drawings by “sculptor” Bałka are always first and foremost a “thought process”. Thus defined Allegra Pesenti, in 2015 (in the catalogue of his last great Polish retrospective at the Muzeum Sztuki in Łódź), this particular type of artistic production, very dear to Mirosław Bałka, being the closest to his original interests, the body and the gesture:
“The exhibited drawings are made on sheets of A5 paper (210X148 mm), which is slightly smaller and more manageable than classic A4 sheet and linked his practice to the writing of a book or to a diary-like form of daily documentation. In fact, to call these preparatory drawings would be incorrect as they relate more to his thought process than to the specifics of the sculpture.”

The “HC thought process” drawings for Trieste therefore exemplarily represent the essence of Bałka’s artistic work which he himself explains in an interview in 2017:
“I treat the artwork as a process of exchange, between me and the others, when I do something I bring it to the space – this is like a lost luggage, I brought my luggage, I leave it and then somebody else can come and can pick it up and use it, open it after coming home or on the bench in the station and look at it.”

THE ARTIST.
The Polish artist, after his debut in the Eighties, in the following decade received an immediate and unanimous international recognition for the coherence and evocative power of his artistic research. Starting from traditional sculpture, he increasingly goes towards abstract forms, he increasingly, from autobiographical notes, extracts “symbolic traces of existence”, constant “memory of presence” (Anda Rottenberg).
This synthetic visionary force is prompted by his reflection on history which, from the special visual angle of Poland, can question the nature of man and the individual and collective memory with a denser responsibility. He translates it into an inventory of universal forms, materials and references, which Bałka makes available to everyone’s consideration and “precipitates” into a very effective use of materials, such as wood, concrete, plaster or – more metaphorical ones – salt, soap and ash.

An answer to Maria Rosa Sossai who, on the occasion of the great 2017 Italian retrospective at the Pirelli HangarBicocca space, asked him for “Artribune” if his was “a way of sharing knowledge and making participants active in the creative process”, turns out emblematic:
“I don’t think that the creative process is just a matter of knowledge. I think it has to do with the not knowing, with the mystery of sharing, with question marks and doubts. The term knowledge therefore does not move forward together with my art, which is rather a bonding to what is unknown and a search for possible answers during this journey of sharing”.