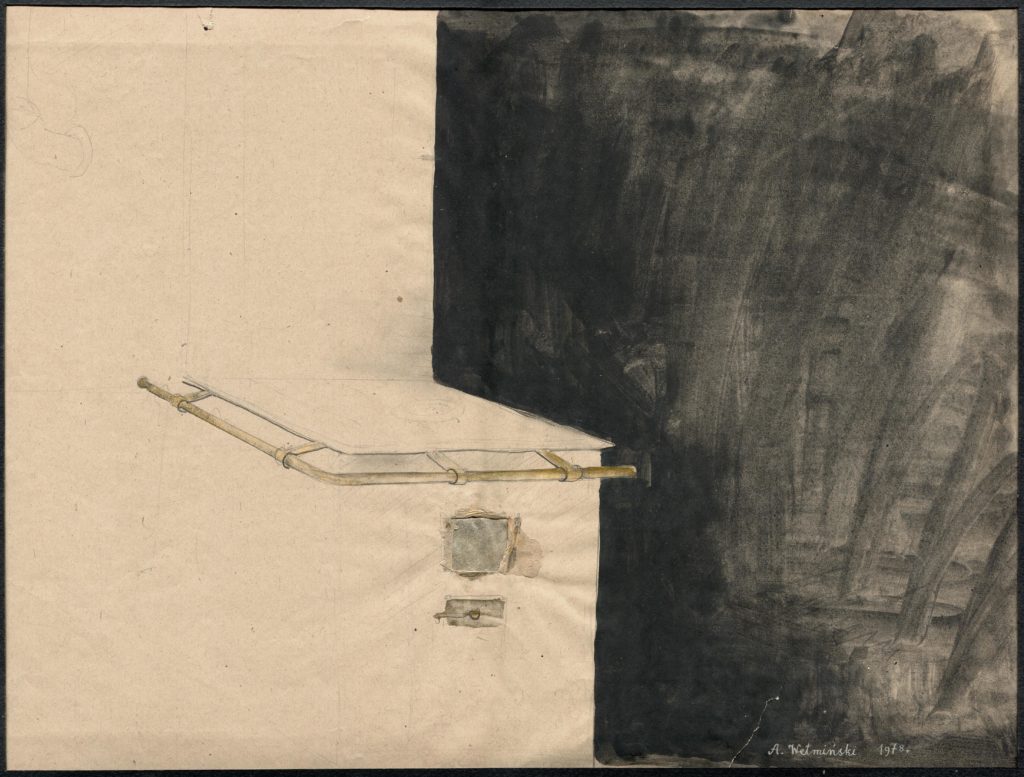 Trieste Contemporanea hosts from November 7th to December 6th 2020 Circulus vitiosus, an exhibition by Teresa & Andrzej Wełmiński organized by Gabriella Cardazzo and Giuliana Carbi Jesurun. The Circulus vitiosus performance connected to the exhibition will be available on Facebook and on Youtube from Saturday the 7th of November at 6.30 pm. read more about the exhibition

Polish artists Teresa (1955) and Andrzej (1952) Wełmiński use many artistic media and formats, including drawing, painting and photography and the production of theatre shows, art performances, objects and installations, distinguishing themselves for combining theatre and visual art.
In Cracow, Andrzej graduated from the Faculty of Graphics at the Academy of Fine Arts and Teresa from the Medical Vocational School. She worked in a Mental Health Clinic. Andrzej associated with the Foksal Gallery (where he proposed his first show in 1971 under the name of Anonymous Artist) and the Krzysztofory Gallery and from the beginning of his artistic career explored the most different media beside the classical techniques, happening and performance included.
In the 1970s the two artists started collaborating with Tadeusz Kantor and became members of the Cricot 2 Theater. In the 1970s-1990s they took part in all the shows and tours of the company. After Kantor’s death, together with the actors of the Cricot 2 Theater, they staged the plays Maniacs (1993); America or don’t look behind you (1995); It’s gone, it’s gone, and thus all stories shall pass away… (2007).
As theater directors since 1996 they have staged many independent projects which have been presented in various international festivals (i.e. Avignon, São Paulo, Rome, Valladolid, Cagliari, Edinburgh, Bratisłava, Moscow, Sibiu, Chișinău, Teheran).
Their last exhibitions (Suspension condition, Urania, Esse est percipi, 2019) bring together topics, meanings and codes that have been central in their long standing artistic activity to identify and unite elements from both the visual and the performing arts. Their theatre is reciprocally closely linked to visual art (Hubble Bubble and Other Persian Miniatures, 2017; The Comet, 2017; Limbo, 2019 are among their last plays) – and objects and installations conceived for a specific play after their stage use often have a life of their own and are displayed in art shows.
Alongside their artistic activities, the Wełmińskis deliver lectures and workshops on theatre history, theory and practices of Cricot 2 (Rote Fabrik in Zürich, the Accademia Teatro Dimitri in Verscio, the Loughborough University, the Rose Bruford College in London, the University of Washington, the Yale University and the University of Teheran have been among host institutions).
Beside major productions and installations, drawings (which are the true “hidden” protagonists in Trieste) always play an essential role in the Wełmińskis’ artistic world. These annotations of ideas and concepts, not always completed and drawn on worn papers as if they were exhumed from some moldy cellar of the mind, very often serve as leaven for their future projects.