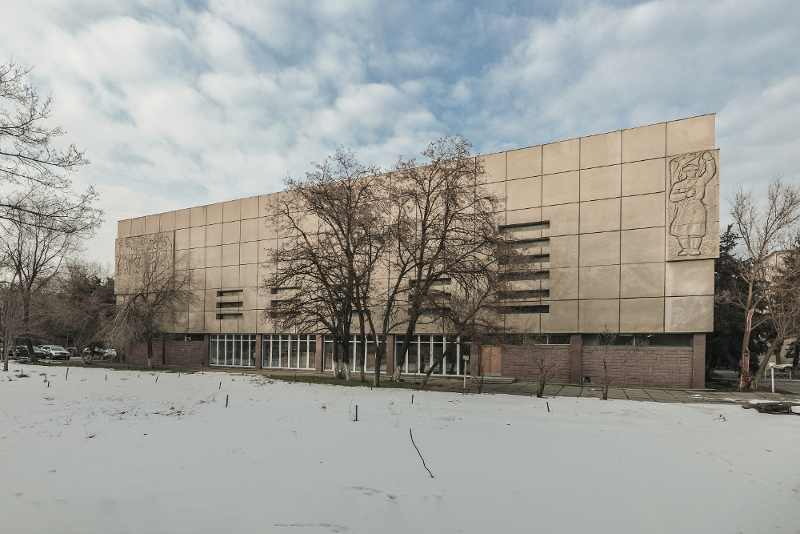 We are pleased to invite you at Trieste Contemporanea’s on Friday 7 May, 6 pm, at the opening of Endangered Species: A plea for a Red Book of Soviet Modernism, a first Italian exhibition by Moldavian artist Ştefan Rusu.

The exhibition is the outcome of a research – part of Rusu’s “Insular Modernities” project – focused on socialist architecture from Central Asia, that includes a juxtaposed photo-series of endemic plants and modernist buildings and the documentary film “Return From The Future”. The research was undertaken during an extensive stay and several trips in Tajikistan and Kyrgyzstan between 2013-2019.

Rare and endangered species, biodiversity conservation, protection of Flora and Fauna, Red Book are frequently discussed topics in the last few decades. Soviet Union’s tools used for biodiversity conservation were the Red Data Books. The “Red Book of the USSR” was established in 1974 and was first published in 1978, which included species of rare plants (and species found in the territories of Kyrgyzstan and Tajikistan as well). The last edition of the Red Book was published in 1985. Since then, with few exceptions, the lists have not been revised and the Red Book has not been reprinted. The Flora of Kyrgyzstan and Tajikistan is still incompletely explored. Many plants have never been illustrated, some of them being confined to a few mountain ranges or even to small valleys.

For Ştefan Rusu to put side by side images of soviet architecture from Central Asia (Kyrgyzstan and Tajikistan) and images of rare plants from those countries, imply a different angle of interpretation of architectural heritage: not only as single buildings, but also as a context that needs an approach similar to the one used for endangered species and their protection. Artist’s activity stresses that architectural heritage of the immediate past (as in the case of modernist aesthetics) is directly connected with present and future urban developments and shows that, however, this preservation is problematic in current socio-economic situation and urban context (in some cases even dramatic) because of a lack of social awareness of historic significance and value of these unique monuments: Rusu’s photo-series and the documentary are an attempt to change this perception.
Some buildings, like those depicted in the “Return From The Future” documentary, are listed as national heritage and therefore protected by the state. However, some buildings are in decay and are not maintained and preserved according to their status because of a weak and inefficient application of the law.
The starting point for Rusu’s juxtaposed plants and architectures it has been the Museum of M. Frunze – a modernist building in Bishkek, designed by G. Kutateladze and Y. Karikh in 1967. In this museum’s collection there is an impressive herbarium (about 1200 items) assembled by soviet revolutionary M. Frunze during his childhood. The herbarium is a poetical reference to Frunze’s unfulfilled path to dedicate his life to natural science.

The state of conservation and the need to preserve modernist architecture, such as this Museum in Kyrgyz capital city, is the subject of documentary and exhibition that are now presented in Trieste: Ştefan Rusu continues a path covered by Trieste Contemporanea’s investigation in these topics in the last period – as it was the case of the 2020 exhibitions Stocznia/Cantiere by Polish artist Michał Szlaga and Dismantling Structures by Croatian artist Željko Kipke.

Ştefan RUSU (b. 1964 in Kâietu, Moldova – artist, freelance curator, editor, and filmmaker). Through artistic, performative, installative and documentary projects, critically contextualises the political transformation processes after 1989, and the changes occurring in post-socialist societies, that influenced the way people and communities nowadays relate to the use of public space. In his artistic and curatorial practice analytic interest is focused on the impact of current urban transformations and interventions and on the way the present time is affected by the authoritarian implementation of past political ideologies in urban planning, social policies, economic strategies, citizen education and daily life.
Ştefan Rusu is the editor of: Spaces on the Run (2015), Reimagining the New Man (2014), Chisinau-Art, Research in the Public Sphere (2011), RO-MD/Moldova in Two Scenarios (2008). In 2012 he directed Reclaiming the City, a film commissioned by the 7th Berlin Biennial, which reflects on socio-economic structural changes and the physical transformation of the city following the dismantling of the Berlin Wall and the impact of gentrification processes on public space. In 2018 he participated in TAB Tbilisi Architecture Biennale – “Buildings are not enough” with the site-specific installation Block 89. His recent project, Insular Modernities, explores how phenomena of socialist architecture are maintained and perceived in the peripheries of the former Eastern Bloc and it analyses in various formats (exhibitions, publications, documentaries, social networks, etc.) modernist architecture heritage from Central Asia.

The title refers to the plot of the science fiction novel Return from the Stars by famous Polish writer Stanisław Lem (in which pilot Hal Bregg returns from a space expedition after 127 years, a time during which life on the Earth has radically changed): the novel discusses the ideas of social alienation, cultural shock and dystopia, which is synchronized with the current state of the city, and the cosmonaut resembles an architect that returns to the site he created in another century.

Return From The Future is a visual essay on the current state of conservation of soviet modernist architecture of Bishkek city. A particular aspect of this investigation is the changing status of the buildings from its former ideologically charged function and position in the society. E.g., the State History Museum (former V. Lenin Museum) or the Gapar Aytiev Fine Art Museum, which suddenly lost their significance with the collapse of Soviet Union, during which the two buildings and collections have been the main instruments to shape the society and the new man – the builder of advanced socialism according to Marxist thought and principles. The film is an overview of the state of conservation of the buildings listed as national heritage, but also an overview on recent urban changes and transformation occurred in Bishkek after the ’90. Film was produced as part of Insular Modernities, a series of documentaries about modernist architecture in Central Asia.

VISIT TO THE EXHIBITION
The exhibition will be open until 15 June 2021, by appointment: please send an email to info@triestecontemporanea.it (if you also want to watch the film, please specify it in your request).
Opening hours at the Studio Tommaseo:
Tue. – Sat. from 5pm to 8pm.
Free entrance.